Getting the Band Back Together: History 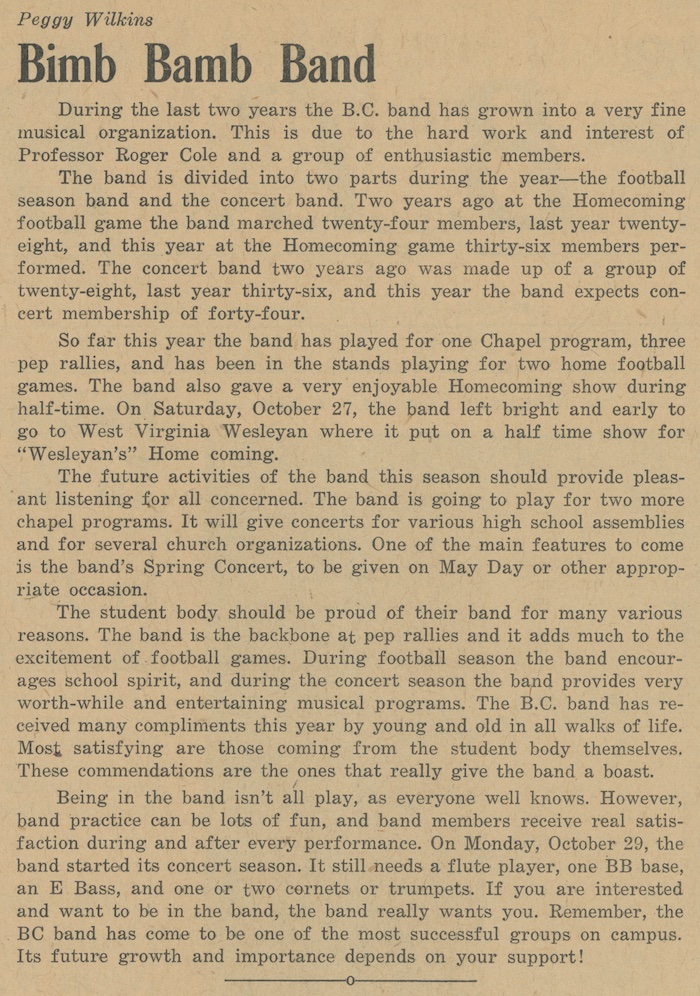 History of the Old BC Marching Band

Although there was a pep band to spread school spirit and a concert band for formal performances in the 1940s, the official Bridgewater College Marching Band did not debut until October 28, 1950. The Bridgewater College Marching band made its first appearance at that year’s Homecoming game against Randolph-Macon Academy.  The marching band was comprised of 25 members, all of whom came from the concert band.  It was directed by Professor Paul B. Sanger Jr.

The historic Bridgewater College Marching Band would spend the next 20 years rousing school spirit. They did this at sports events and pep rallies through uplifting music and the enthusiastic collaboration of cheerleaders, shield-bearers, and majorettes.  There were performances at College half-time events and band members travelled with sports teams to games at other institutions. The band’s bright red, black, and gold uniforms added to the appeal of the group. The 1959 edition of the Bridgewater College yearbook Ripples describes the marching band as accompanying the cheerleaders through residence halls to rouse the student body into a grand march to pep rallies.  Residents of Bridgewater would often see the marching band leading the charge down Main Street during Homecoming. When the football season ended, the marching band reorganized and performed concerts at Christmas and in spring.

A part of local history as well as campus history, the original Bridgewater College Marching Band won first place in the Harrisonburg Veterans’ Day Parades from 1966 to 1968. The band also occasionally performed at local high schools to raise interest and appreciation for music in the next generation of college students.

The saying goes that all good things must come to an end, and the original Bridgewater marching band was no different. After twenty years of hard work and dedicated service, the marching band was dissolved in 1970 by Dr. Robert C. Monroe, the new director, who wished to focus the band on concert performances. However, various other reasons are often given by contemporary sources for the ending, such as personnel changes, unpopular new uniforms, and the shifting focus of the music program.  Whatever the case, the marching band was missed!  Enjoy these images from the Bridgewater College archives with artifacts on loan and from the Reuel B. Pritchett Museum Collection as we explore how Bridgewater College is Getting the Band Back Together!